This impression is confirmed by the series of images that Peters has made, which offer a view out of an imaginary window onto the world outside. This is especially the case if you compare it with the portraits of the twelve “different” women. For it immediately becomes clear that they are related. To put it another way: the one group of works complements the other. The way they interrelate broadens the field of what might potentially become visible. The comparison becomes still more revealing in view of the fact that
some of the photographs taken from windows, such as those in the series Seoul, have been digitally altered, while the three “original photographs” from the series Indoor (pp. 101–103) show “almost empty” images that according to Peters “were dreamt up on the computer.” What are we looking at? Is it a reflection of reality or a mere computer simulation?
Even this question can’t be answered easily. Seoul is made up of a group of three, almost square pictures (90 × 84 cm) with an identical format and structure (pp. 158, 159). Each has an internal frame running along the top and the bottom, which is cut away along the left- and right-hand sides. The cut edges are strengthened by two adjacent rising verticals in the interior part of the picture. The pictures show a kind of window within a window. In their upper half, a narrow horizontal line cuts across the entire surface of the picture. Behind it, a grille-like structure fans out. It is more clearly visible in the middle than in the lower part. Beyond this inner frame, the grille continues in a different color. In some places it is fully intact, in others only partly, and in others it is painted over in a translucent white, as if someone had whitewashed it. It is all pure illusion. No painter has put his hand to it. Even the delicate rendering of the internal frame and the rendered brackets at the edge of each picture, as well as the beams on the brackets in the central picture of the triptych, have been produced by an elaborate computer operation. Whether consciously or unconsciously, Peters is quoting here the shining “luster” of painting, which Ernst Gombrich believes originated with Apelles, the outstanding painter of Antiquity. Given this, is it really pure coincidence that no original painting of his has survived? For in Peters’s work it is only these lustrous outlines of forms rendered in light and shade that establish the character of the window-picture and at least suggest three-dimensionality.
Is this a reflection of reality or a computer simulation? It is equally neither and both. All that can be seen is what is to be seen, or more precisely, what may emerge on closer inspection, very much in the sense of Frank Stella’s “what you see is what you see.” Unlike Stella, though, Peters is not interested in producing a self-referential visual object, but rather in producing visibility itself. There is nothing more natural than this. Diane Arbus once noted in her diary that people don’t see things because they’re visible; rather the other way round, they are visible because people see them. In this short sentence, the great photographer summarized what western art has had its eye on, so to speak, since breaking free of the spell of religion: to make things visible. In the final analysis, the visible world is the product of images.
In the meantime, the visual mass media have been using polished and clichéd images to cover over again what art had mapped out in the realm of the visible. Critical art has reacted to this trashing of the visual by reflecting clearly on the conditions of visual representation. More specifically, its subject is now visibility itself, and no longer the representation of a particular subject. Instead of a subject that isn’t there at all but is merely a symbol referring to “reality,” what Peters’s “photographic” pictures show are the possibilities for producing visibility. Just as the eyes of the subjects of Different Persons scarcely allow the viewer to gaze into their souls, so the window in the triptych Seoul offers no more than a glimpse of the South Korean capital. Instead, what one catches sight of are potential images of people and things, whose relation to the world beyond images is extremely fragile and uncertain. At the most, they are able to preserve traces of reality.
As a result, Peters shifts the focus of his apparently perfect pictures from photography’s natural tendency to produce symbols to an illustration of the actual language of images. The opposition between analog and digital photography resolves itself independently of their respective technical wherewithal. The result is an apparent tautology: each of the artist’s pictures conveys first and foremost its own nature as an image; in other words, that it is an image. And it is this that forms the critical aspect of Peters’s work.

The photographs from the new series Indoor, and still more so those from Salta, Seoul, and Sar, lack almost any characteristic elements; the differences between the photographs are limited to a few inconspicuous details. The photographs of the four series all have in common that they were taken in airports and offer views from the arrivals hall of the surrounding countryside. They show that Peters is not afraid to take photographs through reflective window panes— a difficult obstacle for most amateur photographers. Peters’s photographs, however, show no signs of light refraction or blurring of focus; the result is that the grid formed by the window frames becomes especially fascinating, dominating the foreground and standing out against the shiny floor. These grid structures form the coordinates of the image, both structuring it and stripping it of its realism, thereby bringing it closer to abstraction. Beyond these common elements, each series has its own specific qualities. Thus, for example, in Sar 1 and Sar 2 Peters put together two photographs he had taken separately, because the departure lounges of the two airports showed similar architectural details (pp. 156, 157). Since both the photographs with the upright and the tilting window frames are surrounded by a white edge, the glazing bars look natural and seem almost to float in space.

The series Salta 1–4 is based on individual photographs all taken in the same place, which Peters barely had to change (pp. 154, 155). He was inspired by the extraordinary constellation of colors and the linear layering of planes. The blue sky, the green lawn, the beige runway, and the wine-red surface of the floor fit into the black window frames’ system of coordinates in a way that produces an almost objectless image. The composition makes one think immediately of the artists of Constructivism or De Stijl (despite the fact that Piet Mondrian, for example, generally avoided green). In this series it becomes particularly clear that although an individual photograph can work by itself, a series is a better way of developing a basic idea. Astonishingly, Peters’s method of serial production comes close to meeting the definition of a cycle; a cycle being distinguished by the fact that its individual works revolve around a central theme, and its whole is more than the sum of its parts.

In the series Seoul, finally, Peters brings to a culmination the idea of photography that overcomes the factual object (pp. 158, 159). Here, too, he took photographs through window panes set in brown frames, but in so doing he brought the distant landscape up against the window frame, turning it into an abstract grid pattern that cannot be located in space. The pattern extends from the left- and right-hand sides of the image, where its more intense colors
actually cause it to achieve a higher degree of realism. The result is that it looks like it might continue beyond the picture frame. Three-dimensional form, depth, or space are entirely eliminated. On the other hand, the clever trick of smuggling photographs of cherry blossoms into the picture lends the entire composition a special charm. And it does so despite the fact that the blossoms seem to evaporate into indistinct, formless white surfaces. They offer, though, an additional indication that these works captured in tones of beige brown are to be understood as symbolizing the Asiatic world.

The Far East can be described as the thematic and intellectual focal point of this series. However, the photographs cannot be considered part of a cyclical composition because their subject is only illuminated from one perspective. For all that, the question may be raised in conclusion of whether Peters’s work when taken as a whole is more or less moving towards a principle of cyclical development. 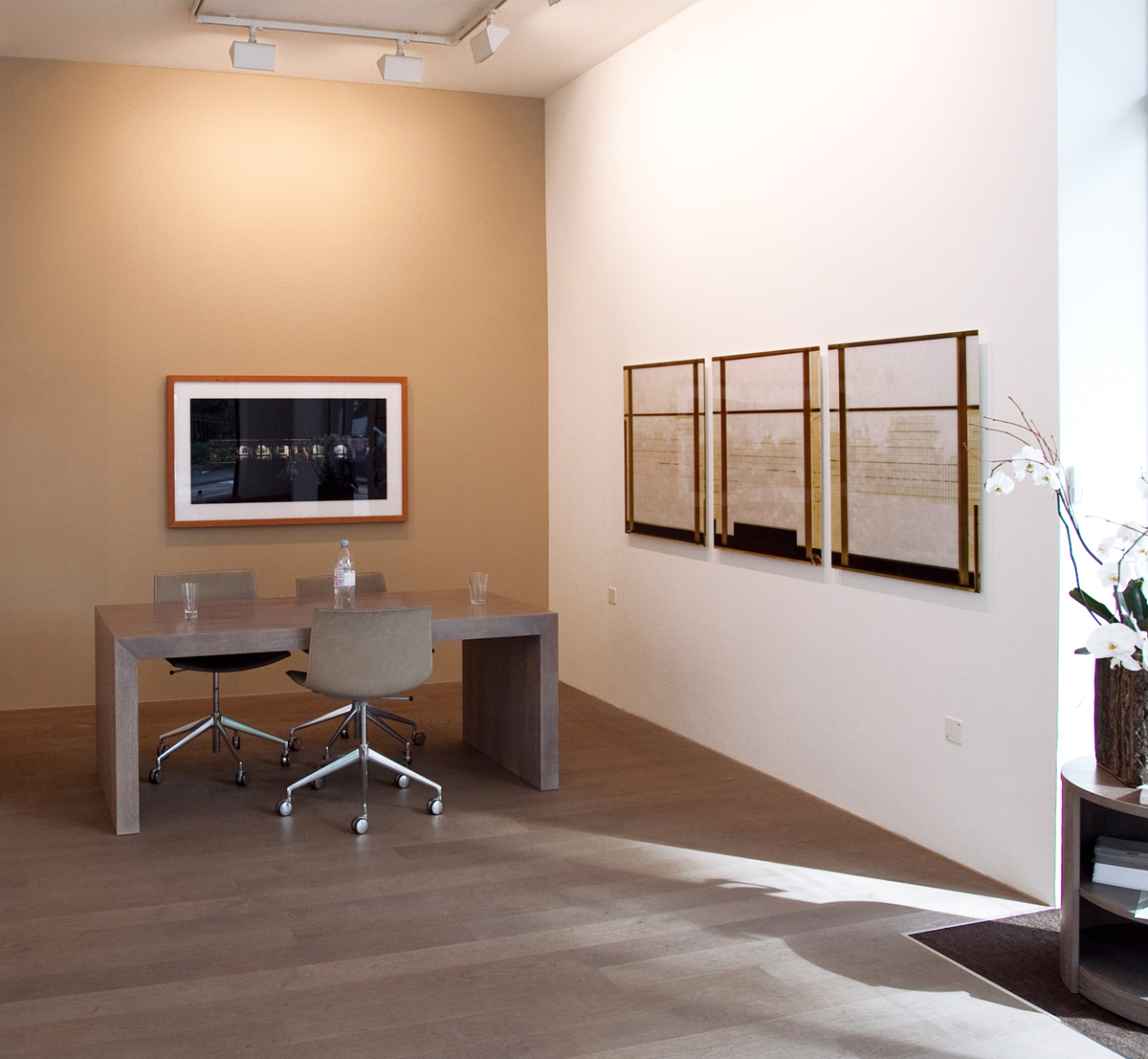